Gambling is a favourite activity for many people, and players tend to have their preferred games to play at a casino. Yet most of the time, these favourites exist in the form of options like slot machines, roulette, blackjack, baccarat and so on. Very rarely do we think outside of the box on gambling games. But as it happens, the world is host to quite a selection of weird and whacky games for gambling on, it would seem.

You never know, but some of the most unusual gambling games could be found fairly close to where you are. Maybe you’ll want to give them a try. Whatever the case may be, we have put together a collection of the most unusual gambling games in the world, so that you can find out more about them and how they operate. Without further ado, join us for a look at some of these entertaining, bizarre games. 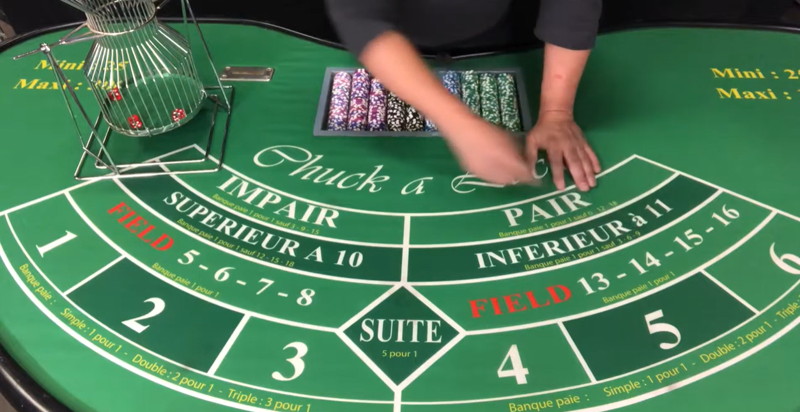 A game that is also known as birdcage, chuck-a-luck comes from another gambling game in grand hazard, and like that game, it can be considered as a variant of sic bo. That being said, Chuck-a-Luck is much more of a carnival gambling game than one that you would ever find being played in a casino. Therefore, it can sometimes be utilised as a way of raising money for charity.

Chuck-a-Luck is played with three dice, and these are kept inside a device that is shaped similar to an hourglass. This resembles a wire-frame birdcage, hence its alternate name. The dealer is responsible for rotating the cage end over end. The dice then land at the bottom. Prior to this taking place, players will stake money on possible combinations of numbers on the three dice. In the simplest variant of Chuck-a-Luck, players will stake on a board labelled 1-6. A 1:1 payout is received if the number wagered on appears once, while a 2:1 payout is provided if it shows up on two dice and 3:1 if it appears three times.

Additional stakes that can be placed in games of Chuck-A-Luck include:

The house advantage in Chuck-a-Luck is higher than most other casino games and can actually be quite a lot greater. And while it may be an unusual enough casino game, it still makes appearances in popular culture. The character of Lazar, portrayed by Marne Maitland, from the James Bond film The Man with the Golden Gun, plays Chuck-a-Luck. Additionally, in the Abbott and Costello film Hold That Ghost, a reference to the game is also heard.

Chuck-a-Luck was once a game that players could enjoy in Vegas casinos, too. Originating in English pubs, the game made its way to the U.S. in around 1800, under the name of Sweat. Yet due to the low-tech nature of the game and there being little mental stimulation from it, it fell out of favour with gamblers, and it was replaced by more popular games.

Known in Dutch as Vinkensport (translated as finch sport), the Belgian Birdsong gambling game sees male common chaffinches competing against one another. The idea with this game is for the birds to sing or make their calls, with the winner being the one who sings the most within an hour. It is primarily active in Flanders, which is the Dutch-speaking region of Belgium, and its origins go way back to 1596, when competitions would be held by Flemish merchants. Around 13,000 Vinkensport enthusiasts remain active as of 2007, going by the name of vinkeniers (finchers), and they breed around 10,000 birds every year.

In the sport, a row of small cages play host to a single male finch each, and they are lined up around six feet apart along the street. The number of calls is increased due to this spacing, as the birds sing for a mate and to establish their territory. A timekeeper will begin the hour-long contest by waving a red flag. Every time a finch sings a correct terminating flourish to their call, a tally mark in chalk is made on a long wooden stick. Once the hour is up, the bird with the most chalk marks is the winner. Players, of course, bet on which of the birds they believe will achieve this.

Cheating scandals have come to light with the sport though, with accusations of artificial enhancement being recorded. One finch sang a record number of 1,278 calls in a single hour, and the owner of that bird was later accused of doping it up with testosterone. Another time, a finch sang precisely the same number of calls in three rounds, which led to the cage being opened and a mini CD player being found within to make those calls.

Certain aspects of Vinkensport have invoked criticism over the years, too. In very early competitions, birds would be blinded with hot needles in order to reduce their visual distractions. A campaign by blind World War I veterans in 1920 banned the practice, with the birds today being kept in small wooden boxes that allow air to come in but keep distractions out. In modern times, animal rights activists accuse the bird trainers of brainwashing the animals into singing more than is natural. 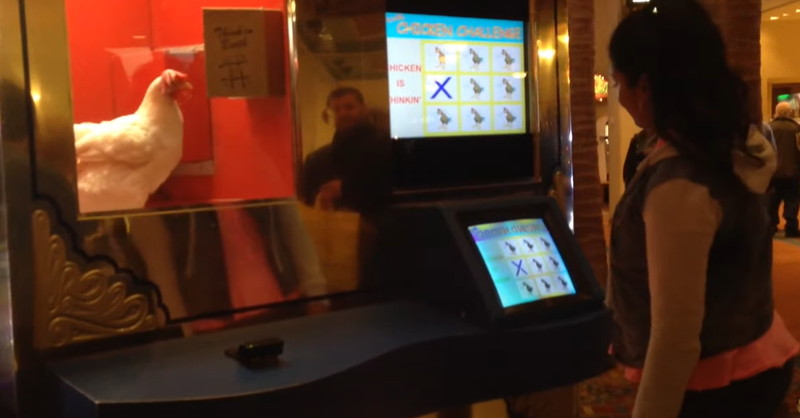 Casinos can sometimes be quite crude with their gambling options offered, and The Chicken Challenge found in Atlantic City, New Jersey is one such game that has been accused of this. Taking place at The Tropicana Hotel and Casino, this game sees players lining up to go head-to-head with a chicken in a game of noughts and crosses. The chicken, going by the name of Ginger, is known as the champion of the game, and players stand the chance of obtaining $10,000 from facing off against it.

As with the Belgian birdsong, The Chicken Challenge has had its fair share of negative feedback from campaigners arguing that it is abusive to the hen. It’s easy to see why, considering the chicken (or chickens, depending upon if you believe that more than one hen is used for game participation) is kept in a small glass box so that it can play against humans.

Naturally, the draw of potentially being able to win $10,000 from beating the chicken in a game of tic-tac-toe is a big one for people. That’s no small sum of money. But it does beg the question of why they can’t simply make an electronic version of this game rather than utilise live animals for the entertainment of gamblers.

Animals seem to come off in such a bad way when humans want to engage in gambling in some areas. And rodent roulette is a game that once again exploits the creatures for such means.

Back in 1946, carnival workers in Nebraska thought up a strange alternative variant of roulette, which involved rodents. They were swiftly rounded up by the police and humane society and taken to court in the end. Despite this, rodent roulette garnered a few fans within a short timeframe.

Also known as rat roulette, it incorporated a spinning roulette wheel in an octagonal shape, which had 40 holes evenly distributes around the outer edge. Gameplay would continue with players betting on these different numbers before two live rats were placed on top of the wheel. The wheel was then spun, and once it stopped, the dizzy rats would stumble around and into one of the holes, with each one bringing its own payout.

The cruel nature of the game led to Logan Champ and Vivian Gorman being arrested in ’46 for running it. Their version of the games saw players receive rewards such as coffee, hams, and canned goods. They both pled guilty to violating a county gambling ordinance, being fined $100 each, equating to around $1,200 today. Another man, Harry Wooding, was also arrested for the same reason in the same year, but his rat roulette game was actually a scam. He rigged the machine prior to rounds by putting cheese inside the lower paying holes.

One of the more common variations of rodent roulette today is Gerbil Roulette, but it is less inhumane. The gerbil is placed in a box on the roulette wheel. Eventually, it hides in one of the many numbered boxes, with that being the winning number for bettors. 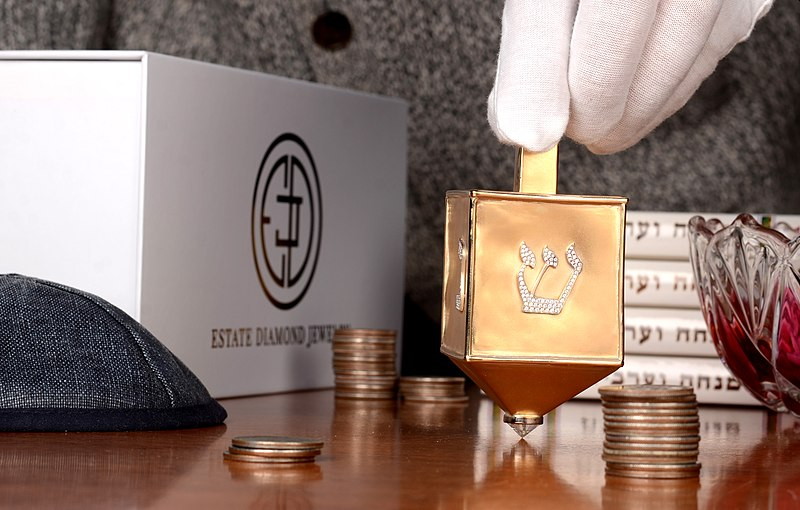 Anyone who celebrates Hannukah is likely to be aware of the Dreidel gambling game. It shares several similarities with casino dice games, and it is played by using a four-sided spinning top, which is known as the dreidel. Each side of this item features a letter from the Hebrew alphabet – nun (nothing), gimel (whole), hei (half) and shin (put in). While it is not specifically mandated for Hannukah, the dreidel game is played traditionally on this holiday by Jewish families.

In 1993, astronaut Jeffrey Hoffman took a dreidel with him aboard the space shuttle Endeavour. He participated in a televised game of dreidel while in space, bringing more attention to the small item.

It’s a fairly simple gambling game to play. All participants place a wager into a pot at the beginning, and this pot is then placed in the centre of the table. Each player is then able to spin the dreidel once. The position that the dreidel lands in is what determines the rewards earned by each participant. Sometimes, the bets from the pot are split amongst the players, while at other times, one player wins the whole amount. Alternatively, extra may need to be added to the pot if the dreidel lands on shin. Once a player wins or the amount is split, another gambling round takes place.

And it seems as though this game is one that has reached certain stars, with reports that former basketball player Michael Jordan lost money while in Vegas playing dreidel. This occurred at the Bellagio Casino, although it is not really clear if the dreidel game was offered by the casino itself or if Jordan simply participated in a game with people he knew on the side.

Dog Fighting and Other Variants

Setting animals up against one another in a fight and betting on the outcome of that fight is, without a doubt, a very cruel practice. And while such activities are banned in many countries around the world, some locations still provide animal fights as a form of human entertainment. The Philippines provides bettors with cock fighting, for example.

Yet one of the cruellest events of this nature is dog fighting, and this has even been glorified since the new millennium. The “99 Problems” song by Jay-Z has a music video which depicts dogs preparing to fight, while rapper DMX speaks about it in one of his tracks. A television commercial by Nike displayed two dogs preparing to fight, and even famous NFL player Michael Vick pleaded guilty to being involved in dog fighting. He pled guilty in 2007 to running an illegal dog fighting ring in Virginia, with 48 dogs being rescued from his home during a raid.

Most frequently utilising Staffordshire terriers and all variants of Pitbull, the dogs usually reside in harsh conditions, which heightens their aggression levels and survival instinct. Trainers will also frequently use cruel methods to try and make their dogs the best in the field. Battles usually take place in a pit and the dogs are unleashed. They will often fight so fiercely that they can bite through their own lips, and so loud and vicious are the cheers from the human spectators, that the fights will usually go to the death, sometimes lasting hours on end.

Dog fight betting has actually been responsible for a turnover of at least $500 million per year in the United States, even though it is outlawed. The dogs are weighed and washed prior to a fight, and then paraded in front of each other across a scratch line, which encourages them to battle. The dog’s fight pedigree is also broadcast, which plays a large part in the wagers placed on them. Large sums can exchange hands on these events, too.