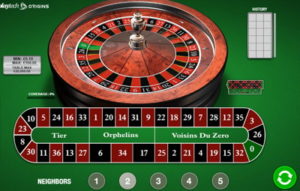 When most people think about the game of roulette, they instantly picture the roulette wheel itself and the betting table. And granted, these are the primary factors within the table game, with one leading to bets being placed and the other providing the result of a round after the ball in it stops spinning around. But there are other features that come into play when engaging in roulette as well. One of those features is the racetrack, which some people may have heard of before, but have never taken the decision to find out more about it or utilise such.

Additionally, you may have heard about the call bets that can occur in roulette, but what exactly are they? And how do you use them? Furthermore, it is good to know how these can benefit you when you do use them. And this is precisely what we will look at today – the racetrack in roulette and the call bets associated with the game. Therefore, if this is a casino game you intend to play, or even if you already play it, and you want to know more about these particular features, you’re in the right place.

What Exactly is the Roulette Racetrack? 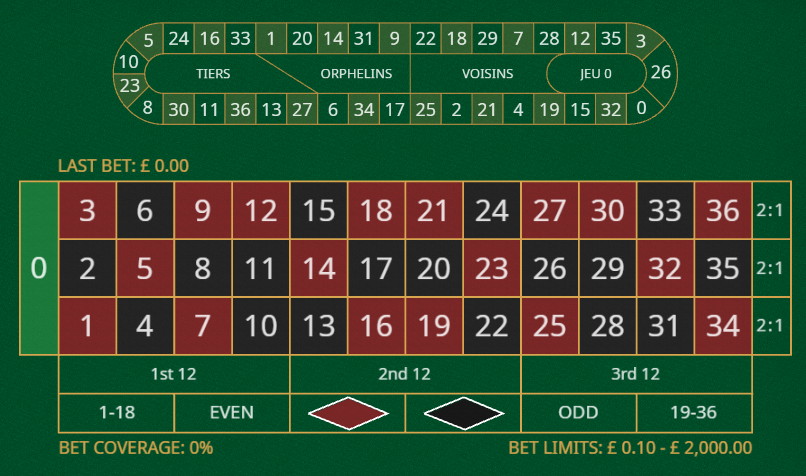 When most people picture the roulette game, it is the spinning wheel that they focus on primarily. But it is also the case that the game may feature a racetrack for you to utilise as an alternative when it comes to placing your bets. And by using this, you can place quite specific bets on certain groups of numbers without having to go through the hassle of placing wagers on them each individually. And it is those bets that are known as call bets, which we’ll get to in due course.

Those bets, and by default the racetrack, are much more frequently offered within French roulette and European roulette games, rather than the American version of the game. And if you were to place a racetrack and a French roulette wheel side-by-side, you would notice quite a large similarity. In fact, the way that the numbers are laid out on the racetrack completely echo the way that they are laid out on the roulette wheel. And it is due to this layout that you can wager on groups of numbers as they are displayed on the wheel, too.

The racetrack is often a lot more prominent in a game of online roulette, although it can be seen at tables in land-based casinos as well. However, because the call bets that are associated with this track would usually be called out by mouth specifically to the dealer, there is not quite as much need for them when playing in physical establishments as there is online.

The racetrack bets that can be “called” exist in four different types, which are:

As you can see, those bets are all in French, which further enforces the statement that they’re all utilised on French roulette more so than anything else. Essentially, the racetrack represents the visual side of those call bets, and it goes by the name of the racetrack because, obviously, it looks like one.

Different Call Bets on the Racetrack

The four different call bets mentioned above are all capable of being utilised on the roulette racetrack. And because the racetrack is laid out in the same way as the roulette wheel, you’ll easily be able to see what the bets relate to on this front. Let’s take a closer look at the different number groups you can wager on by using the racetrack, also known as call bets. 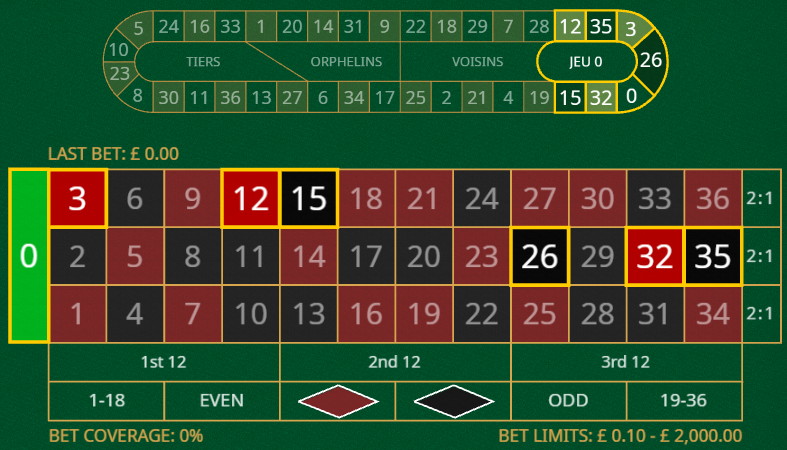 The zero number is not so frequently wagered on in roulette as a sole number, because it has one of the highest house edges associated with it. By selecting a Jeu Zero call bet instead though, you wager not only on the green zero, but the six numbers closest to it on the wheel, too. There are four on one side of it – 12, 35, 3 and 26 – and two on the other side of it – 15 and 32.

Four chips are utilised to cover the seven numbers, with a single chip placed on the 0 & 3, 12 & 15 and 32 & 35 splits, as well as a straight up wager on number 26. With the Jeu Zero bet, you win if the ball lands on any of those numbers on a spin. While the most desired outcome is for the ball to land in the 26 pocket for a 35/1 payout due to it being a straight wager, the other numbers still provide a reward of 17/1 due to the split. Covering seven numbers at once in a wager like this is better than covering each number separately in a straight. 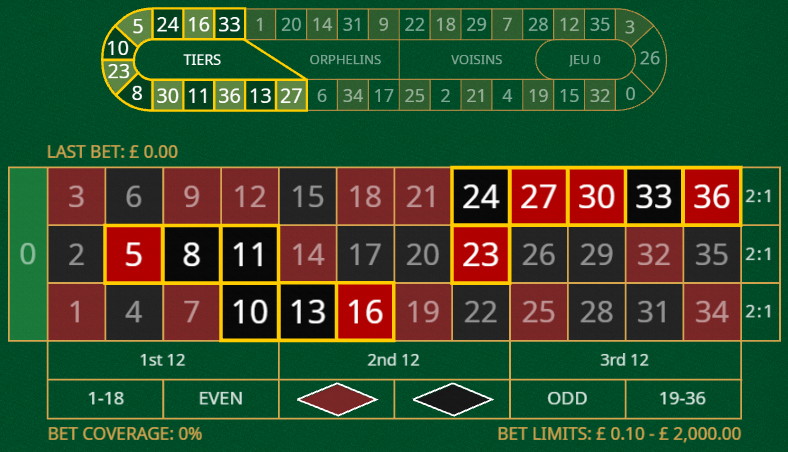 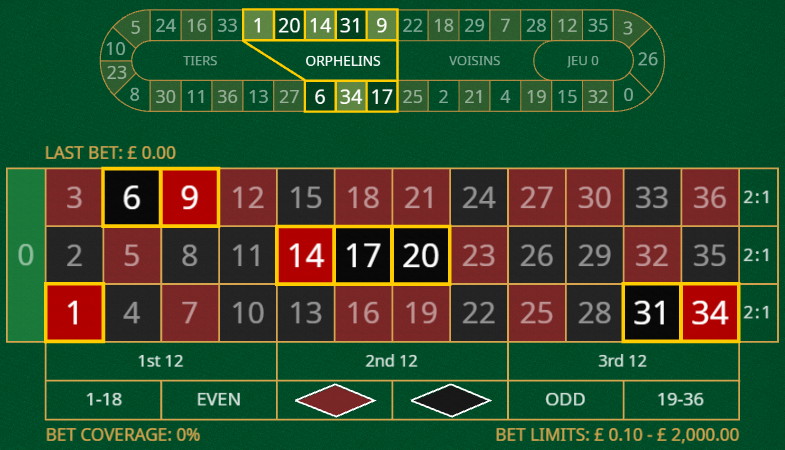 The name of this bet translates to “orphans”, and it covers the numbers left stranded in the middle of the racetrack. They are numbers 1, 20, 14, 31, 9, 17, 34 and 6. At either side of this group of numbers are the previously mentioned Tier and the soon to speak of Voisins. The final three numbers in the group – 17, 34 and 6 – are on one side of the track, while the others exist at the other side.

You’ll make use of five of your gambling chips to cover all of the orphelins numbers, of which there are eight in total. A straight up bet is placed on the number 1, while split bets are wagered on 6 & 9, 14 & 17, 17 & 20, and 31 & 34. Of course, this requires two wagers on the number 17 automatically, while the number 1 is a straight bet, so they will provide bigger wins if the ball lands on such. 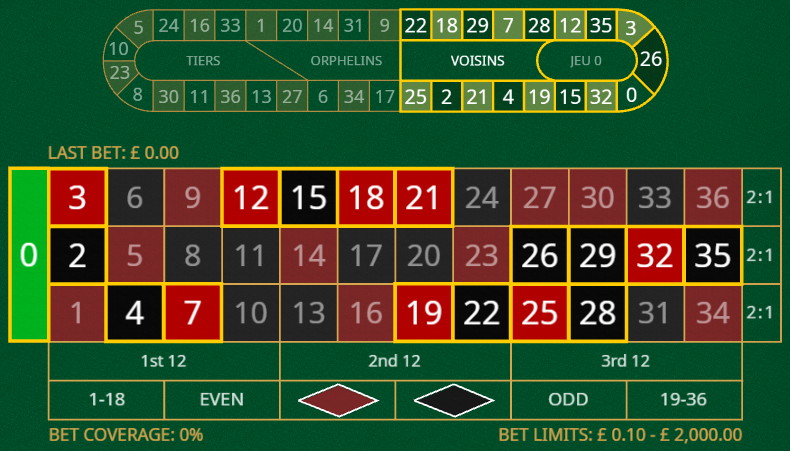 The final type of racetrack call bet that you can place is the Voisins du Zero, which essentially means the neighbours of zero. To look at it another way, it serves as a sort of extension of the Jeu Zero wager, encompassing a larger selection of numbers near to the 0. Basically, the numbers are all those that aren’t the Tier or Orphelins options, running from 22 through to 25 at the other side. In this wager, you are covering 17 different numbers, so you stand a higher chance of winning with this call bet than with any of the others already mentioned. 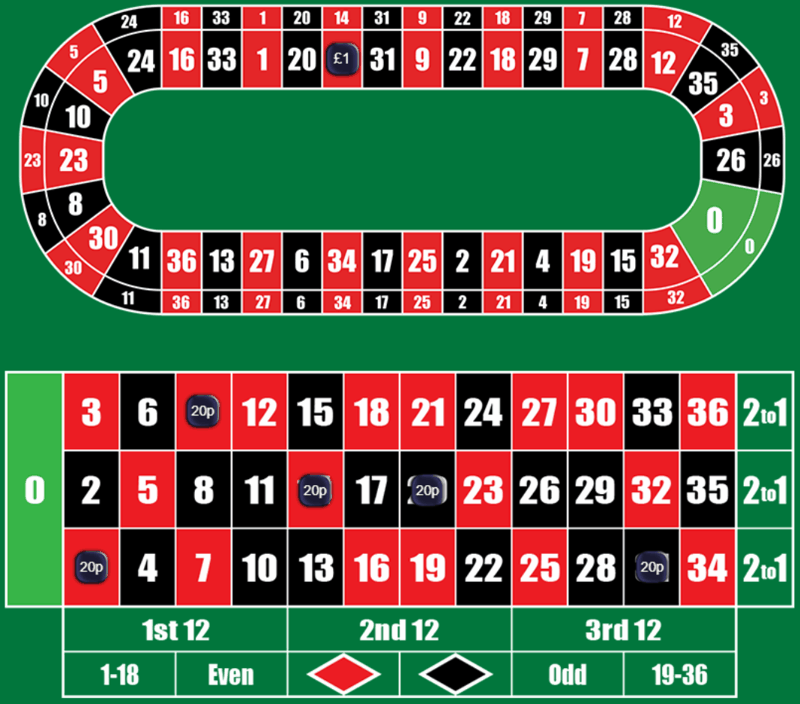 As well as the four call bets mentioned already, the racetrack can be used for another type of bet, with the most common name for it being the neighbours. This differs to the Voisins option, as that focuses on the neighbours of the zero. A standard neighbours bet is nothing to do with that, and instead allows you to choose which neighbouring numbers to wager on yourself.

To proceed with this, you simply hover over a specific number on the racetrack, and the two numbers to its left as well as the two to its right are highlighted alongside. Clicking on the number then ensures that the wager is placed on each of those five numbers in one go. Playing a neighbours bet of this in a land-based casino would require you to say to the croupier that you want to bet on, for example, “14 and the neighbours”. The croupier would then proceed to put your five chips on 14 and the numbers on either side of it (see example in the image above).

With five numbers covered in such a wager, you stand a 13.5% chance of winning in a round. In this type of neighbours bet, a straight is placed on each of the five numbers, meaning that you will need at least five chips to be able to partake in such. Who knows, perhaps you can risk it all on such a bet and win big. Ashley Revell managed to win $270,600 after he sold everything he had and went to Vegas for a single game of roulette with the £135,300 he had from the sale. Of course, he wasn’t racetrack betting, and instead backed red on a roulette spin. But you never know, you could be the first to win vast sums on a racetrack roulette wager!

Choosing to bet on the racetrack number groups simply slows you to cover numerous bets from other standard wagers. The house edge involved in roulette does not change, regardless of how you bet. This means that no matter which of the main call bets you utilise on the racetrack, the house edge is maintained in the same way as if you were betting on red or black, odd or even, a single number of whatever.

The only thing that does differ is the variance. While the house edge on a single zero French or European roulette wheel exists at the 2.7% mark, the variance is different if placing a Voisins bet when compared with a single number bet, for example. Voisins will, without a doubt, hit more often than a single number wager. Whether you choose to utilise a racetrack bet or not is entirely up to you, but just be aware that the house edge won’t be affected by the decision you take on this, just the variance.