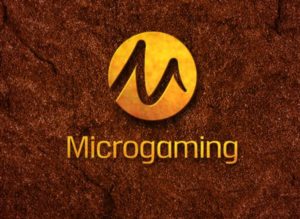 Today, online casinos are considered to be the norm for the gambling world. In fact, more than ever before exist for people to sign up to and enjoy their favourite casino games, including slots, table games, video poker, live dealer options, and more. It wasn’t always that way, though. There had to be something that created the first spark leading to the wildfire of casinos that have spread across the internet throughout the proceeding years.

That’s why we’re going to be taking a look at the first online casino and seeing how this impacted the gaming world. What happened after that first platform launched? What did it look like? And how did players engage in their favourite casino games? How have things advanced since that time to lead us to today’s exciting online casino setup? All these questions and more will be looked at right here. Therefore, if you want to know about the origins of online casinos, join us for a closer look. 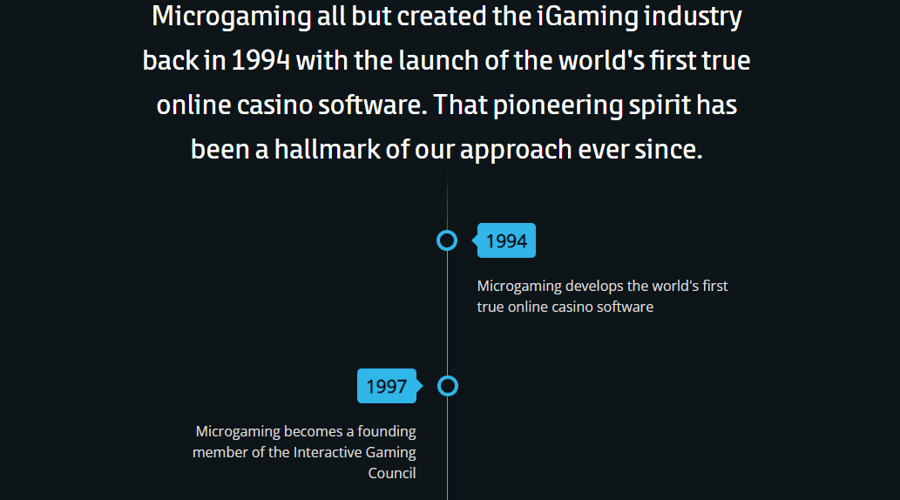 To be able to really consider the first online casino, we need to travel all the way back to the early 90s. It was in 1991 that the internet was made available for people to utilise in everyday life. Of course, it had been around for many years prior to that, with the original idea coming in the 1960s to enable time-sharing of computers, and once the initial internet was crafted, it was only available for the military to use in the 1970s. And it was the linking of commercial networks and enterprises in the early 1990s that marked the beginning of the transition to modern-day internet.

It was in March of 1990 that the first high-speed link between the National Science Foundation Network (NSFNET) and Europe was installed, connecting Cornell University in New York with The European Organisation for Nuclear Research (CERN). Tim Berners-Lee would start writing the WorldWideWeb six months later and by Christmas of that year, all the tools had been built for a working Web.

In 1991, the Commercial Internet eXchange was founded, allowing further communications to occur, and it didn’t take long for the internet to go global. By 1995, it was fully commercialised in the United States of America.

But it was in 1994 that Microgaming set up shop as a new company. Known as the pioneering company to develop gaming software for the online world, it is also Microgaming that lays claim to the creation of the first ever online casino, launching it in the same year. 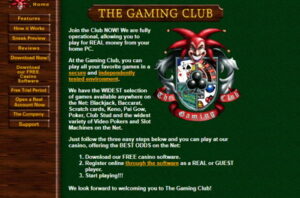 That casino was named the Gaming Club Online Casino. As it happens, that casino still exists today, albeit in a different setup to what it originally was. And while it maintains software from Microgaming on its site, it has also incorporated games from brands like Netent, Evolution, Rabcat and Pragmatic Play, to bolster its offerings.

In those initial stages though, there were very few online casino games to play. One year after launching the Gaming Club Online Casino, Microgaming proceeded to create online casino management tools as well as a player tracking system.

And it was when 1996 rolled around that more and more casino developers started putting their own sites out to the world for people to join.

Blackjack, roulette, craps and video poker were the first games to make their initial mark on the online casino world. But Microgaming made headlines again when it launched the slot game known as Cash Splash in 1998, which came with its own progressive jackpot included. By that time, Microgaming had already been joined by the Cryptologic developer in 1995, founded by brothers Andrew and Mark Rivkin from the basement of their parents’ home in Toronto, Canada. 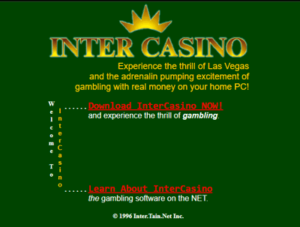 Together, they operated as the first online casino developers, with Cryptologic also forming a payment processor known as eCash. The company would also launch its own casino site in ’95 – InterCasino. Again, that platform still operates online to this day.

Software developers then started springing up every so often, bringing a new influx of life into the online gaming world. These providers did their ultimate best to continue developing not only their own games and casinos, but to advance the industry even further. A 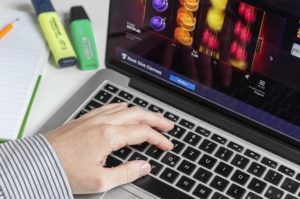 In the early days of online casinos, the primary way to engage in gameplay was to download them to your computer. That’s how most gaming sites proceeded with things for some time. Players would download the software to their computer via their dial-up internet connection and then load the games up whenever they wanted. This was all that the technology of the time provided for, but it was quite fine due to the fact that the number of casino games was limited to just a few.

Back then, it was obviously impressive enough for players, and as more and more companies got involved in the online casino world, things advanced. This included both the number and style of online casinos as well as the improved technology.

That point was proven when between 1996 and 1997, the number of online gambling sites increased from just 15 up to a much vaster 200. And the popularity of these sites has been on the up and up ever since then. And these platforms led the way for online poker sites to emerge in 1998, and the casino industry via the internet was said to be worth around $830 million by that time.

With the new millennium dawning, the casino market became quite competitive in a rapid timeframe. Each brand and operator wanted to become the biggest and best at what they were doing. It was with this that they started introducing things like casino bonuses, rewarding new players with the chance to claim exciting amounts on top of their deposits, promoting additional opportunities at gameplay. And this assisted, alongside the improving technology, with maintaining the interest in online casinos.

Soon enough online slot games, heightened progressive jackpot games and multiplayer possibilities became available. Of course, there were some people who were hesitant to play online, fearing that the games could be manipulated against them.

Yet soon enough, gamers realised how much potential there was in playing games at online casinos. And the popularity of them started skyrocketing throughout the mid-2000s and onwards. As these sites took off around the world, the casinos were translated into numerous new languages, catering to players in different areas on a much more native level.

Naturally, this led to a much greater player experience, and developers and casino operators alike wanted to capitalise on this with ever improving games and possibilities. Such innovation and new creations soon led to the introduction of mobile casino gaming and then live dealer games a few years afterwards. And doubtless, there is a lot more innovation and enjoyment to come from the online casino industry moving forward.

During the time as things moved onwards in the new millennium, online casinos began incorporating instant play web-based casino gaming, too. Also going by the name of no-download casinos, these platforms allowed players to sign up for an account and play all of their favourite games from their chosen web browser, rather than having to download anything to their desktop computer.

Of course, a stable internet connection is required for uninterrupted gameplay, so this method of gaming really took off once broadband connections allowed for constant links to the online world. It remains as the most popular form of casino gaming today, with most platforms providing just this option or in some cases, the chance to choose between download and instant play. 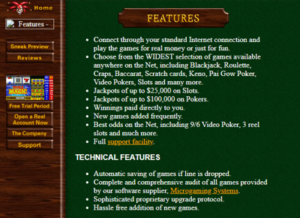 The Gaming Club casino that was launched in 1994 remains a highly popular destination for players to join and play at today. The site is owned and operated by Bayton Limited today, a Maltese registered company, which possesses a gambling licence from the same country.

It started out as a download-only casino, but today serves players with instant play web-based gaming options and mobile connectivity. You can view the casino in a variety of languages, including Russian, French, Spanish, Latvian, Italian and more alongside the standard English.

Gaming Club casino came about once the internet had gained its commercialisation in ’94, and with this, the country of Antigua and Barbuda cemented its place in history by becoming the first nation to pass regulations relating to online gambling activity. This gave it legal stature, and the Free Trading and Processing Act was passed through there, enabling it to grant legal licences to organisations wanting to provide gambling via the internet.

This is where the Gaming Club secured its initial licence from, ensuring that it wasn’t operating illegally or without regulation like some other casinos did and still do today.

It took another two years before the second official online casino came about in the form of InterCasino from Cryptologic. As noted earlier, the site remains in action today, coming under the ownership of Dumarca Gaming Limited. Again, this company is based out of Malta, and it owns an official licence from there, keeping it regulated.

This casino hosts a larger portfolio of games than the Gaming Club, including options from Blueprint Gaming, Yggdrasil, Red Tiger, NoLimit City and various other brands. It was with the introduction of this casino that another licensing body became active as well.

The Kahnawake Gaming Commission, based in Mohawk Territory within Canada, established itself as such, providing licensing and regulations to companies looking to enter into the world of online gambling. Yet InterCasino garnered its licence from Antigua and Barbuda as well, and in 1996 it accepted its first real money wager. This occurred when William Scott, a former Ohio bookmaker, chose to engage in sports betting there.

Two years later, he was charged with illegal sports betting participation, which led to the business being taken over swiftly. This led to extra success for InterCasino, which launched InterCasinoPoker in 2002 (later renamed simply to InterPoker).

One other point of interest regarding the InterCasino is that it was responsible for creating one of the online world’s biggest jackpot payouts back in 2005. At that time, one of the progressive slot games awarded a player with $1.76 million, although that record was broken two years later when a blacksmith acquired $8 million from a slot at the casino. 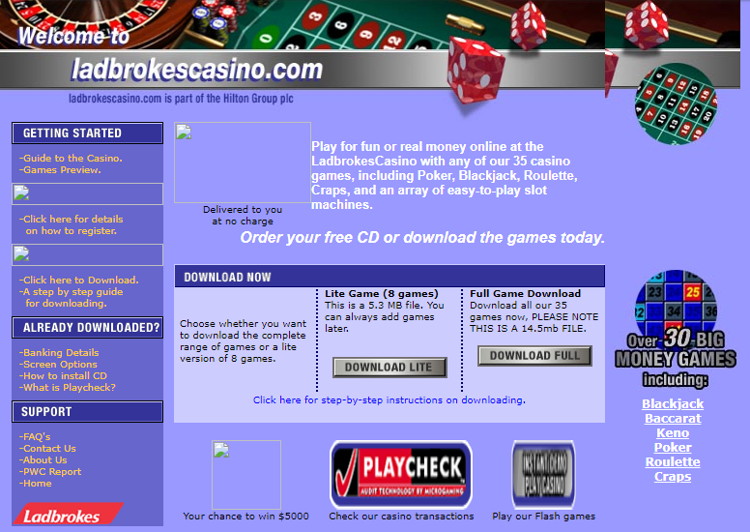 With the success rates of Gaming Club and InterCasino, as well as their associated products, other companies sought to gain their fair share of the rewards in this industry. And of the 200 operational platforms by the end of 1997, a variety of sportsbooks, online casinos and video poker sites could be found. And these were spread out across the world.

Big-name brands in the United Kingdom, like Ladbrokes and William Hill, introduced a range of casino games online alongside their sports betting capabilities. And this drew even more people towards online gambling, thanks to the extra incentive of exceptional bonuses and promotions to benefit from.

Throughout the late 90s and early 2000s, these mammoth promotions are what most operators focused on providing to potential players. And thanks to the fact that casinos were able to provide such inviting options to gamers, sports betting sites also grew in popularity when they started providing the same sort of perks.

Peer-to-peer betting was launched by Betfair, which revolutionised the industry in 2000. And this only led to even more creations coming to light in proceeding years.

Now, in 2022, the online casino industry is probably at the biggest it’s ever been. It promises to continue being so as well, thanks to the fact that issues like the coronavirus pandemic diverted some gamblers to the online gaming scene. And with even more exciting innovations coming to light, such as VR gaming, cryptocurrency gambling and so on, there’s plenty to get involved with in this sector.