Book of Dead is probably Play’n GO’s most popular slot title; you could claim it is the most popular Egyptian themed slot in the industry – it’s often linked to welcome offers and the like – so it makes sense that a follow up would come along eventually.

Rise of Dead is an ultra volatile 5×3 slot with 20 fixed paylines and a bang average RTP of 96%. Graphically it is an improvement, and the atmosphere as you explore the ancient tombs of the Pharoah’s and search for the Book of Thoth is tangible – but what’s in it for players? 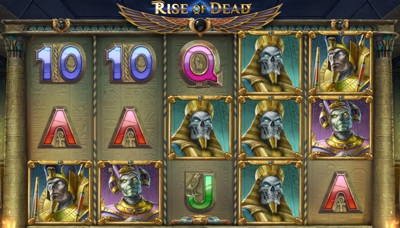 There are 3 features worth mentioning here, and the first is Mega Stacks.

Mega Stacks is active on each spin and chooses one symbol at random to fill 12 consecutive spaces on the reel. Useful, but not earth shattering. However, it comes into play later, too.

Rise of Gods is a randomly triggered feature (decided by the Gods themselves I presume) that will see the 1st, 3rd and 5th reels to show identical Mega Stacks. After this, there is a chance that the remaining reels might do the same, blessing you with a full grid of identical symbols – cha-ching.

The Ancient Free Spins feature is the main event with this game, and it is here where the big money can be won.

Triggered by landing three of the scatter symbol, your initial 10 free spins can be bolstered throughout the round indefinitely by landing further scatters. This is an exciting prospect that makes ever free spin exciting as you never know what it could lead on to.

Winning free spins will turn any contributing high paying symbols into expanded symbols, creating further wins, while Mega Stacks is also active during this round.

Low paying symbols can be stacked up to 8 spaces on the reels and wilds are included in the Mega Stacks appearing in groups of 6 or 7.  Put all this together and you have the chance to win up to 5000x your stake.