If you were thinking this might be some knock-off unbranded slot masquerading as a mash-up of Game of Thrones and Gladiator, you’d be wrong.

It’s set solely in the gladiatorial era, and while it’s true to say that this is hardly a neglected theme for online slots, Play’N GO have made this one their own.

It’s a dramatic little number, with a swelling soundtrack and sound effects of screeching warriors alongside the clash of metal creating a real atmosphere. I was hooked in no time.

Now I know that for many players the entertainment value comes second to the potential to make some money; I happen to think they are both equally important but that’s another matter. Anyway, let’s get into the game itself, shall we? 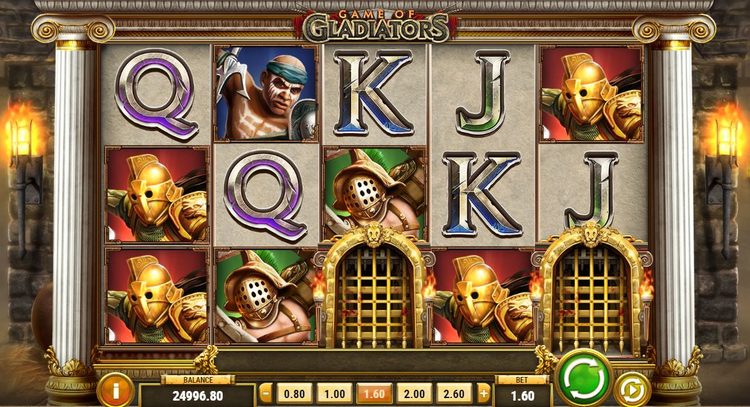 There’s nothing special about this game initially, it’s a 5 reel, 20 payline offering with no option to adjust the number of active paylines. You can adjust the stake though, of course, and this ranges from 20p a spin to £100 per spin. The RTP is 96.42%.

Autoplay is available and the game also senses if you are ending the spin early and asks if you would prefer to play at a higher speed, which was pretty neat.

The symbols are made up of thematic J, Q, K symbols, four gladiators with different fighting styles which stack and then expand, and the wild symbol portraying is a tiger – which is appropriate.

These really make the game what it is. It looks great and sounds great but the number of features are what add the most entertainment value and are also the key to walking out of the arena with some money in your pocket.

These are randomly triggered before any spin during the base game, and help to keep things interesting while you are waiting for the main event. 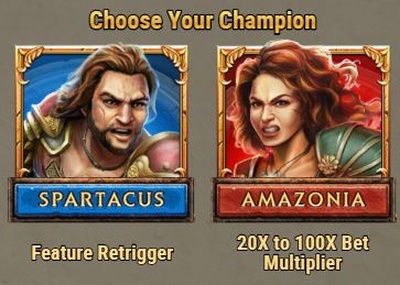 This free spins round is triggered by landing 3 scatter symbols anywhere on the reels, but before you begin, you must choose either Spartacus or Amazonia as your champion. This is important later.

During the feature, each gladiator symbol that lands will be added to the Battle Meter at the top of the game, and your champion has to fight them off each time his/her symbol lands on the reels.

If they fill up the meter before you can fight them off the round is over, but if you manage to destroy them all then your champions’ bonus comes into play. Spartacus will re-trigger the feature, whereas Amazonia will grant a multiplier of between 20x and 100x.

It’s worth noting that the freespins will carry on indefinitely until the round is either won or lost, you aren’t limited to a certain number.

I found this game highly entertaining I have to say. The nice little twist on the freespins round coupled with the Choose Your Champion aspect was really fun to play and gives you more to watch than just the reels.

Although it is supposed to be a high volatility slot it didn’t perform that way for me – I hardly ever won more than my stake in the base game – I triggered the Enter the Arena Battle Spins feature relatively quickly and even with a multiplier at the lower end of the scale I walked away better off than I started.

I would tell anyone to give this game a go. Tool up, enter the arena and do battle.