Anyone who saw Netflix’s hit documentary series, Tiger King, will be well aware of who Joe Exotic is.

For those of you who have no idea who I’m talking about, you are about to get quite an education.

This slot is a little controversial given that the subject matter is currently in jail for attempted murder (more on this later), but it’s also a genius move by Red Tiger Gaming for a number of reasons, and not just because of the tiger connection.

At the end of the day though, what we want to know is whether or not the game is any good, so let’s have a look at it. 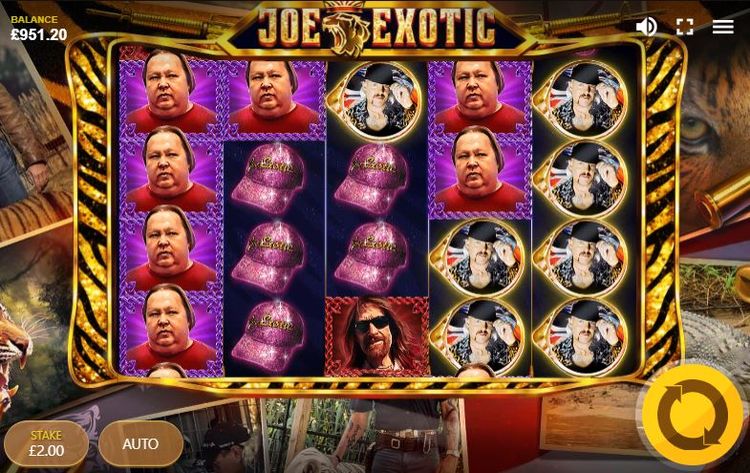 It’s a volatile game if we take Red Tiger’s description to heart, but there is so much going on each time you play that it doesn’t often feel like it.

The base game contains wilds, scatters, and a randomly triggered dynamite feature which destroys all low paying symbols and replaces them with high paying ones, boosting your chances of a tasty win.

What makes this game so fun though, is the three headline features that can be triggered by their corresponding scatters.

In my experience these trigger fairly often too, although there are plenty of teasers where you land two scatters only to be denied a third. This would be annoying if the bonus rounds never hit  (like in Fishin Frenzy every time I play it…) but the ratio is pretty good.

All in all the game is extremely playable, a bit nuts (which is fitting), and has the potential to make lucky players very happy. Ok, there is no really big win potential here, but how often do they hit anyway? For people who play slots for fun, you won’t find much that will beat Joe Exotic at the moment. 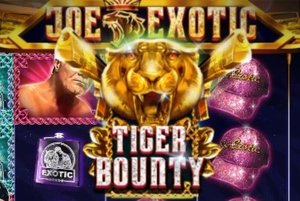 Using a mixture of real images and excellent graphics the Joe Exotic slot comes alive with animations and gaudy decoration.

The fast pace and constant action are backed up perfectly by the art design, and although there are lots of sparkly hats and oversized symbols that spread confetti, bullets and bank notes over the reels etc, it’s not one of those games that will give you a headache – they have the balance right.

The country music playing in the background really sets the tone, and is actually provided by Joe Exotic – he’s a professional musician amongst many other things, see below – so there’s real authenticity here too.

Who is This Joe Exotic Fella? 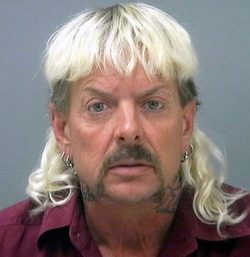 There is way too much to his story to include everything here, but in brief, Joe Exotic is most famous for running the Greater Wynnewood Exotic Animal Park between 1998 and 2018, where he bred and sold tigers (not always legally). It was ultimately his love of big cats that brought him national and eventually international attention.

The zoo he ran was also something of a magnet for eccentrics from all over the country, who came to work for him and in some cases lost limbs in the process – his life so far has been utterly mental.

Aside from handling wild animals with zero protection, he has also been a:

Oh and he was married to two men at the same time, one of whom tragically and accidentally shot himself in the head and died in 2017.

He was arrested in 2018 on suspicion of hiring hitmen to kill competitor and rival Carol (effing) Baskin. She’s still alive, but Joe is now in jail serving a 22 year sentence.