Now it is officially December we can all go Christmas crazy without fear of the “it’s November” crowd judging us.

For some that means eating and drinking twice as much as normal for the month, for others it means slowly winding down as the month continues – for us, it means unwrapping some new slots and spinning the reels.

Not everyone loves Christmas, we get that, so this isn’t a list solely of reindeer, santa, and carol singing themed slots – although there are some of those in here – but there are some corkers that have nothing to do with the festive season at all.

So deck the halls and jingle some bells, it’s time to look at some new slots for December.

This one came out on December the 1st and is the latest in the ELK Gold Series.

It’s feature rich which I am a personal fan of – I would always take multiple features over a higher RTP for example, it’s just more fun – but the features don’t trigger often. In fact, you can tear through a £50 bank in about ten minutes on £1 spins if you are unlucky, but wins can mount up very quickly too.

The random features are nice, but the re-triggerable bonus drops are the key to the max win potential of £1 million (based on a maximum bet). This is a free game round with multipliers. You can buy the bonus, a first for ELK, but in my experience you rarely come out on top doing this.

It’s a solid effort from ELK, even if the theme and art work aren’t to my personal tastes. I prefer a bit more action in the base game but this will definitely hit the mark for those who like more volatile games. RTP = 96.2%

A Tale of Elves – Microgaming 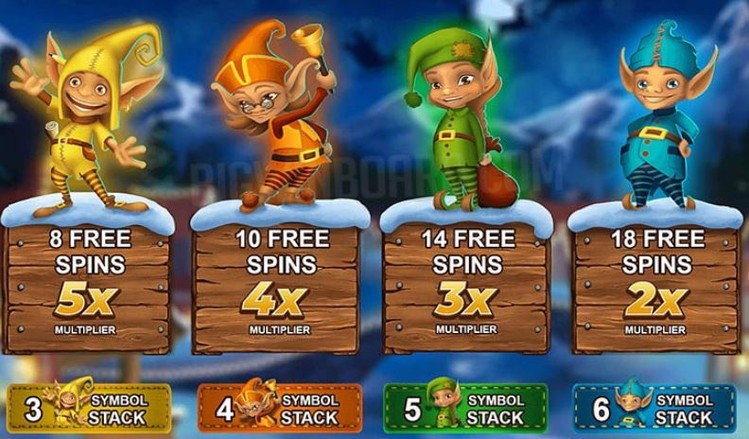 A lot of people are fed up with Microgaming, and to be fair they have been guilty of chucking out bang average reskins of late, but this one is different.

On the face of it we have a pretty standard slot here, but you can never judge a present by the wrapping paper as the saying goes (I might have made that up). Yes, its a 5×3 with a wild, a free spins round, and 243 ways to win, whoop di do – but there’s something else.

The scatter is the gift that keeps on giving here, because landing just two of them will trigger a random cash prize of up to 50x your stake. It’s not earth shattering, but it hits around 1 in 20 spins, and it’s always a welcome sight.

What’s more, landing 3 or more scatters not only triggers the bonus round but also gives you a bonus payout of 1x, 20x or 200x, and free spins can be re-triggered. The round itself is choice based, so you can go for more spins with a lower multiplier or fewer spins with a higher multiplier essentially.

It’s a great festive option that is full of fun and drip feeds wins on a consistent basis from what I saw. RTP = 95.07% 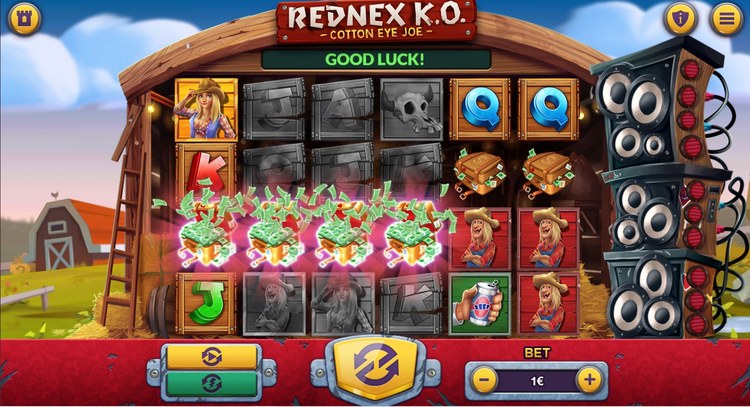 This is just my type of game, it’s an absolute riot, complete with the song Cotton Eye Joe playing on a loop.

If that sounds like it would make you want to break things you can always turn the sound off, but the game itself is a hoot, and Green Jade Games offer players a new dynamic that other developers don’t match.

You have the ability to force the bonus feature in this game and turn non-winning lines into winning lines. So if three bonus symbols land but aren’t lined up, you can destroy the symbols around them to line them up.

The bonus round itself is a redneck fishing experience – throwing dynamite into a pond; and dead fish equals cash prizes because there’s nothing weird about that, right? Barmy, but brilliant fun.

There are lots of little wins along the way too so you get a lot more entertainment value as well as shed loads of spins that you wouldn’t otherwise have been able to afford, not to mention the dancing wild.

It’s a 50 payline 6×4 grid, with brilliant graphics and amusing animations backing up a multi-layered game that feels interactive and full of energy. RTP = 93%-97% 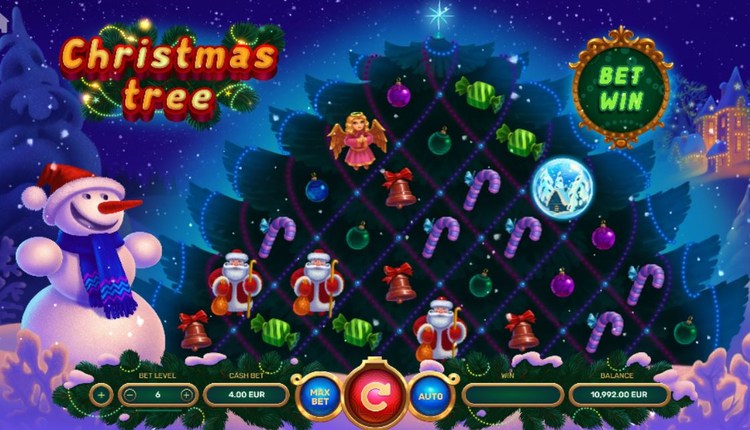 The first thing to note about Christmas Tree is that the game grid is, well… a Christmas tree. So it doesn’t have traditional rows and reels. Very festive.

It uses cascading reels and cluster pays and boasts a maximum win of 25000x which isn’t bad going, and although it’s not exactly feature heavy it does have some additional elements that keep it interesting.

Mystery symbols crop up fairly often, wrapping up some symbols in a gift box before revealing them as something else.  Notice also the bauble in the top right hand corner; this will show one of three things on each ‘spin’:

Three wins coming from a single spin (thanks to the cascading reels feature replacing winning symbols with new ones) will trigger whichever feature the bauble is displaying.

Free spins bags you 5 free spins with multipliers increasing after each cascade; the coin win rewards you with between 5x and 1000x after the spin of a wheel; and the multiplier applies a win multiplier of between 2x and 30x based on the spin of a different wheel.

It’s a gentle festive themed slot with enough imagination to make it stand out, and just enough spice to make it a better option than most others too. RTP = 96.4%