It’s time for another quick roundup of a few new slot games from the 2nd half of October. I’ll keep it concise but informative so that you come away with a solid idea of what to expect from each one.

These are all available to UK players and they are only a week or so old, so be gentle with them.

It feels like NetEnt have played Ip Dip to come up with the theme for this slot – it’s a weird one! They have created a mash up of the classic fruit machine theme with symbols to go with it, and put it in a Chinese setting. It doesn’t make any sense whatsoever but that’s not really important at the end of the day. It looks good enough to play.

You’re looking at a 5×3 board to play on with a decent RTP of 96.71%, a wild symbol with a 2x multiplier on wins, and medium to low variance that still offers decent win potential actually.

The freespins are interesting as they are triggered by landing specific winning combinations, and you can then win more in the same way during freespins, so the round can end up lasting a long time, and it comes with its own 2x multiplier.

It’s a good game but I can’t see it making any headlines, even though I hit freespins on my third game when testing it and walked away with 98x – if only I was playing with real money, right? 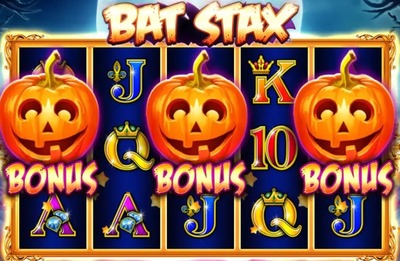 This one should get you in the mood for Halloween; Bat Stax is a spooky horror themed slot full of pumpkins, spiders, black cats and bats, funnily enough.

It’s a 5 reeler with 20 paylines and the chance to win up to 1000x your stake. This isn’t massive and it’s medium variance too, so if you tend to be lured by bigger numbers you might not fancy it. It’s fun to play though, with a great sound track and a few features.

The bat overlay symbols can boost your wins considerably and if you get three of them they become expanding symbols. This feature is active in freespins too. Landing 3 of the pumpkin scatters triggers freespins and there is also a gamble feature active. 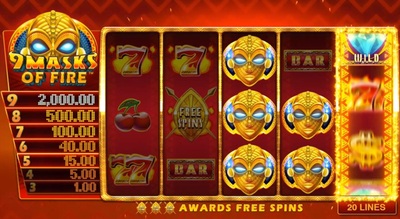 Graphically this game doesn’t knock your socks off, it’s ok and everything but we are getting used to some really high quality visuals these days and 9 Masks of Fire certainly isn’t that. It’s got a brilliant atmosphere though thanks to the relentlessly beating drums in the soundtrack.

It’s winning potential that really counts though, and if you land 9 masks in the base game (which is what the game is all about) you can net 2000x your stake, and with a £60 maximum stake that can really add up.

Free spins are re-triggerable and technically infinite which is always fun, but as a bare minimum you will get 10 for landing three scatter symbols, and either a 2x or 3x multiplier to go with them. 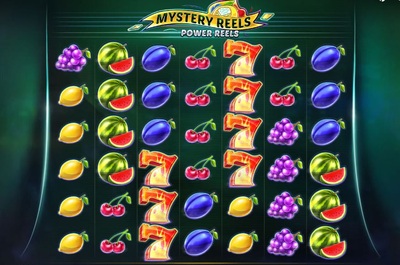 Bit of a different layout for you here as Red Tiger’s latest release is a 7 reel, 6 row, 30 payline slot offering up to 5000x your stake as a reward. Of course, this doesn’t come easily and the game is also high variance with an RTP of 96.67%.

The base game has some cool features such as win both ways, and you can also form wins from multiple different symbols on the same pay line which is a rarity. It also makes it more difficult to track the game as you play but you’ll catch up I’m sure.

You can also benefit from plenty of wilds and a mystery symbol feature – although the latter does its job so quickly you don’t even notice it half of the time.

This is a fun retro style slot but i’d say you will need a decent bankroll and steady nerves to take it on. 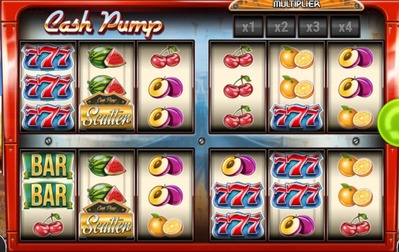 This is what I’m talking about. Cash Pump looks good, it sounds good, and it makes a change from the typical slots out there. It’s definitely one for the petrol heads, set in a gas station in the era of rock’n’roll in America.

This game is played simultaneously on four different 3×3 boards with 5 paylines each, making it a 12 reel game with 20 paylines I suppose, and all wins pay left to right. Plus, stacked wilds duplicate to all four play areas multiplying wins by up to 4x.

A somewhat stingy 4 scatters are needed to trigger 7 freespins, but you can trigger 5 more by doing the same again, and this also increases the stacked wilds multiplier – so this is where the big money is to be found. What’s more, the multipliers are unlimited.

As well as being high octane it is also a highly volatile slot, but the RTP is pretty good at 96.86 and the max win is 10,000x which is by far the highest on this list. 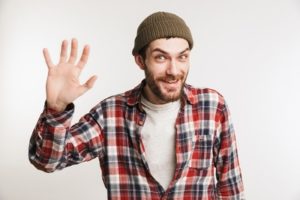 So there you have it, 5 new slots from five different developers for you to try out and see what you think.

I love how frequently new slots are released because I tend to have a few staple titles that I go back to time and time again, interspersed with new releases that I might play once or twice for variety. So the more there are to explore the more enjoyable it is for me.

You might only play some of these games once and never touch them again, but that’s ok, they served their purpose at the time, and it’s only by trying different games that you get to really know what you like best in a slotting session.