BluePrint have won me over with this one – it probably helps that I loved Thundercats as a kid and had all of the figurines; anyone else used to fancy Cheetara? Anyone..? Just me then.

On with the review. Hoooo!

First off, this game looks incredible. It’s seriously impressive on the visual side of things, and not just graphically either. The way the game reflects the 80s TV show delivers a real shot of nostalgia, with familiar sequences and an immersive soundtrack it’s impossible not to get sucked into the world of Third Earth and the Thunderfleet.

So I’m a fan. But I’m also probably a bit older than some of you, so let’s just revisit Thundercats for a second and bring everyone up to speed.

Children of the 80s won’t need to read this section. Thundercats was a hugely popular cartoon series following the journey of the Thundercats, a group of feline humanoid aliens from a planet called Thundera.

But their planet was dying and so they had to leave. They boarded the Thunderfleet and took off for pastures new, but the evil Mutants of Plun-Darr had other plans and attacked them as they searched for a new home.

(You’re getting into it now aren’t you, be honest)

The Thundercats’ fearless leader, Lion-O, decides to put them down on a nearby planet named Third Earth, and luckily the planet’s inhabitants do their best to help our cat-like heroes fight and evade the evil Mutants.

Tygra, Panthero, Lion-O, Cheetara, the kids WilyKit and WilyKat, and of course their faithful companion Snarf represented all that is just and noble in the world.

Honestly, it was so good.

Back to the Slot 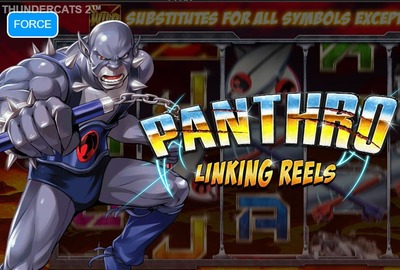 Back to business then, and this slot is much more than a great nostalgia trip. Thundercats Reels of Thundera is absolutely chocka with interesting features.

I don’t think I’ve ever seen a game with so many randomly triggered base game modifiers, there are 10 of them altogether and they play out like this:

The following 4 could randomly trigger after a losing spin: 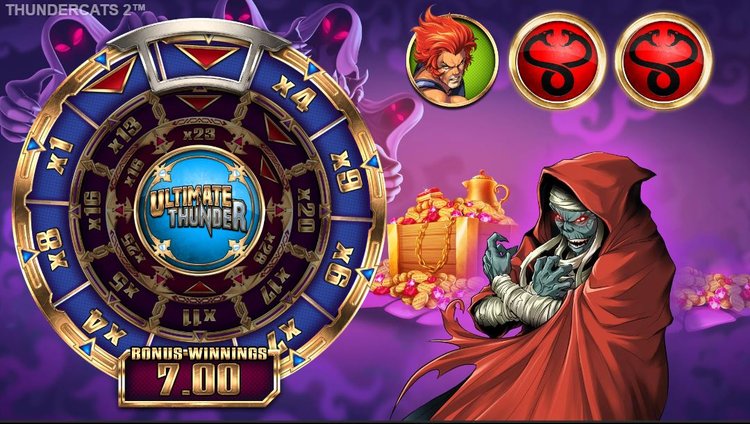 3 bonus Thundercats symbols on any one spin will trigger the bonus wheel where you can activate one of 6 other features:

So there you go, that’s pretty fun and potentially rewarding at the same time, with an extra element of player choice thrown in.

I love this game.