“Everyone has a price, the important thing is to find out what it is.” – Pablo Escobar

Every slot has a price too, and if the stars align this one could gift you just over 1,500x your stake.

That’s right, the hotly anticipated Narcos by Netent, based on the Netflix series of the same name, is finally getting ready to cause chaos on the online slot scene. It’s been in development for over a year now, and in May you will finally be able to get your hands on it and say, Buenas Dias.

It’s going to be a 5 reel x 3 row action packed game (unusual for Netent) with 243 ways to win and more features than a Columbian drug mule would get years in prison. Ok, maybe not that many, but it’s packed. 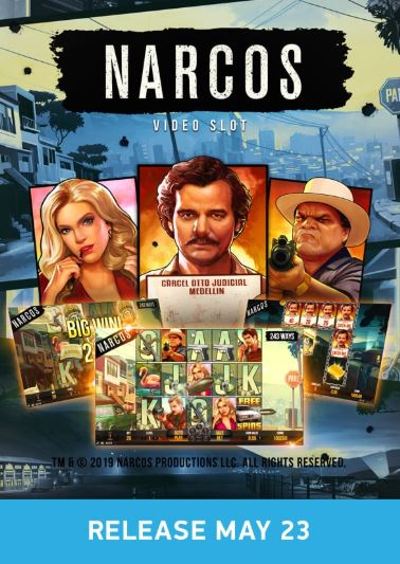 There’s no mistaking what this one is all about. The soundscape perfectly sets the scene on a street in Medellín and gunfire regularly cracks through the air. The graphics are superb, clearly placing the slot in the 80s but using everything that modern technology has to offer; symbols move, set on fire, spin around, explode – it’s lots of fun to watch.

The features have been cleverly woven into the theme too and help to keep you engaged, they haven’t just been tossed in without consideration, everything links back to the story.

The symbols themselves also add to the atmosphere, ranging from lower paying J, Q, K, and Ace’s all surrounded by guns, grenades, and cash; up to the higher paying symbols that portray the characters you will know from the series itself like José Rodríguez Gacha and Connie Murphy, plus the DEA badge wild symbol and a couple of DEA agents, Steve Murphy and Javier Peña, hunting Pablo and his men.

Wilds that form part of a winning line will transform into walking wilds and will move one space to the left on every spin, making each occurrence potentially worth more and leaving you wondering whose side you are on – should you really be wanting the police to show up? If you want to win you will do.

The Drive By feature is randomly triggered and sees a cartel member drive from behind the reel before spreading gunfire across it, spinning some of the high value symbols around and turning them into wilds, leaving bullet holes in the rest.

If three or more locked up symbols appear on the same row you will activate the Locked Up feature, granting you a random coin win before three free spins begin. During these free spins only locked up or golden locked up symbols can land, and if they do they will be added to your haul and your 3 spins will reset. If you are lucky you can win up to 271 times your stake during this feature.

The last feature is the Free Spins feature (which could have been given a better name) and you will need 3 of the scatter symbols to land anywhere on reels 1, 3 and 5 to trigger it. 10 free spins are your reward, during which the ensuing gunfight going on in the background between the cartel and the police could turn high value symbols into wilds for better payouts. Of course, the walking wilds are still active here, and if your free spins end with walking wilds left on the screen you will get a final bonus free spin.

Can’t you tell? I’m dying to have a go on Narcos, it has incredible visuals, genuinely exciting set pieces and potentially very rewarding features, 2 of which seem to trigger fairly often. The last, the Free Spins feature, is apparently as difficult to pin down as the elusive Pablo Escobar himself, but I would still call this a medium variance title all in all.

This is definitely going to be worth playing, it’s one of the best branded titles I’ve seen in a while. My only question for you is – Plato O Plomo?